13 Comments
By the winegetter 2007, South Africa 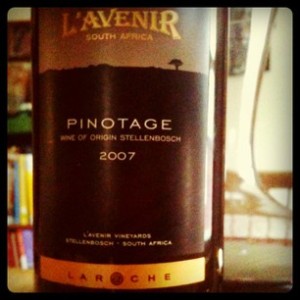 As I mentioned before, Nina and I met in Botswana, while she was interning for the National Museum and I was doing part of my legal training for the local human rights advocacy group DITSHWANELO. While there, we had the great fortune of trying a number of awesome South African wines (Botswana does not have a wine industry). The wines were super affordable and I liked a lot of them.

One particular grape we both grew fond of is Pinotage. It is native to South Africa and was first created in 1925 when Abraham Perold, a professor of viticulture at Stellenbosch University, crossed Pinot noir and Heritage vines (Heritage is better known as Cinsault). The first wines were made in 1941, and the legendary Kanonkop winery planted its first vines in the same year. The grape seems to be perfect for the South African climate and growing conditions, but has not really been adopted elsewhere.

Cork and cap top for this pinotage

When I first tried Pinotage in the early 2000s with South African friends in Germany, my friends were very upset. The wines were incredibly hot from alcohol, and they tasted rubbery. This was in line with what I had read prior to tasting the wines. One of our friends, an older Boer lady, was so upset, that she suggested shooting people that make bad Pinotage like this (she also advocated shooting wine columnists who say Pinotage tastes like burnt rubber). The problem back then was, and petty much still is: It is very difficult to get good Pinotage outside of South Africa. There are exports, for sure, but they tend to be not very good. And the ones that taste good, cost a fortune once they reach Europe or the US.

So being in Southern Africa allowed us to develop a taste for Pinotage, and to find wineries that we enjoy and want to drink more of. Nina’s favorite in Botswana came from Laroche’s L’Avenir winery, the L’Avenir Pinotage Reserve. I fancied Tukulu winery’s Pinotage more, but also enjoyed the L’Avenirs.

We acquired this bottle as ransom from a friend of ours who visited us in Germany on his way from Seattle to South Africa for the football World Cup 2010. He was staying with us on his way there and back. When we chatted with him while he was in South Africa, he asked what he could bring for us, and Nina did not hesitate to ask him for wine (always being the wine schemer that she is). And he did bring us back two bottles each of 2007 L’Avenir Pinotage and 2007 Tukulu Pinotage. We had a bottle each in Germany, and two came with us in our move from Germany to Ann Arbor.

It was still our anniversary, so to connect us back to Botswana, I had picked the 2007 L’Avenir Pinotage for consumption after dinner. The wine was decanted for 1 hour prior to tasting. It has 14% ABV.

In the glass, the wine was of dark red color with slight hints of browning. The nose showed berries, plums, leather and tobacco notes, as well as petrol. I detected some eucalyptus, but Nina didn’t find it, so I am not sure. The first thing that struck me when we tasted it, was that this pinotage was surprisingly light-bodied (more medium, but definitely lighter than expected). It had a bunch of acidity and strong tannins, with leather and noticeable bitter notes towards the end. It was low on fruit aromas. Over time, the wine mellowed out and the bitter notes disappeared. The heat of the alcohol was not disturbing its long, lingering, complex finish.

While writing this, I am realizing that this sensoric description does not do the wine justice. Seen as a whole, it was actually nicely smooth, and the tannins were never overpowering. I feel like it was a good member of Team Pinotage, especially because it shied away from the overbearing fruit that some show, and the burnt rubber taste that others espouse. The nose was gorgeous, and the wine definitely pleasing. It was as powerful as I remembered these wines. According to Cellar Tracker, this wine is nearing the end of its drinking window. What I can attest to is that it is still very drinkable! 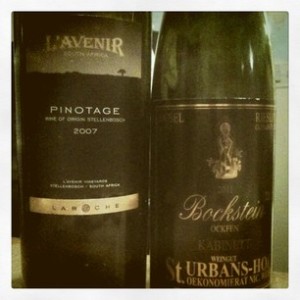 These two made our anniversary a blast.