Today’s Sunday Read returns to Germany, as I just stumbled across this fascinating article on Vinography. Apparently, the University of Geisenheim, Germany’s elite school for winemaking, has developed what appears to be a cross between a Mars Rover and a tractor to work the Mosel’s steep slopes. It looks pretty futuristic, and could be easier to handle than the rail-driven carts I wrote about earlier.

It’s still a prototype, but who knows what good it will end up doing? Fascinating stuff for sure. Also, the article contains some breathtaking photos of steep Mosel vineyards. So even if you don’t care about “Geisi” the rover, check out the photos.

Vinography: The Robotic Savior of Slate?

Somewhere along the Mosel, November 2013

I’ve spent the last five days at the Mosel, where I was lucky to taste 2012 Rieslings with some of my favorite producers, and new contacts. Most of these tastings were dedicated to the 2012 vintage, but it was hard not to talk about the 2013 harvest, which was just finished a few days or weeks ago, depending on the winery, so let me start with that.

2013 seems to have been a very difficult year: It started with low temperatures which led to late bud break and flowering, followed by a very dry summer. Some areas saw early summer hails that led to some areas remaining without any yield. Once harvest time came around, the weather started turning wet and rainy, which meant vintners and their staff had to time picking grapes quite well in order not to get grapes that were either too soaked with water or brought in a bunch of water.

All in all, 2013 seems to have reinforced the need for a lot of work in the vineyards throughout the year (e.g. cutting down grape clusters very early once it was clear that the ripening period was shorter). What I tasted from the barrel showed quite some acidity (as was to be expected from a very mixed weather year), but aromas seemed to be alright. Most winemakers lamented how low their yield was, but that they were fine with the result in the barrels. This is the third in the last four years that brought significantly lower yields than on average, and it could mean financial difficulties for some….for now, a lot of the wines are still bubbling, and it is wait and see.

But now to the 2012 vintage. Let me recap the growing conditions, with the help of Mosel Fine Wines (if you haven’t signed up for their free newsletters, go and do that now!):

March 2012 was unusually warm at the Mosel, which led to an early bud break. Through uneven weather conditions in June, the yields fell quite a bit and there was early rot due to a rainy July. Other than that, conditions were normal. And a standard September weather brought a quick rise in sugar levels, maintaining higher acidity levels as well. The October had cool nights which made the acidity remain rather high and grapes remained mostly clean with low levels of botrytis.

All in all a rather good year, with the problems of low yields arising from June and July.

I had not read much about other people’s assessments of this vintage, so I was excited to go and try for myself. As you may recall, 2011 along the Mosel was, for my taste, a bit too low in acidity. Back in June 2012 I wrote: “2011 (…) was a year with high yields and very, very healthy grapes. (…) Nina called (what we tried of the 2011s) subtle, I would add sophistication. They also showed great mellowness. Think of 2010 as a crazy, modern art painting and of 2011 as a well composed and pleasing piece of art.”

In retrospect, and having tried more 2011s, I think I am really struggling more than I realized back then with their low acidity. Which was good for the dry Rieslings, but made the fruity and sweeter styles more difficult.

The 2012, in contrast, cannot complain about too little acidity. The wines all showed a nice balance of healthy acidity and enough sweetness. They were light and elegant, and refreshing. I probably benefited from trying them longer after their bottling than the 2011s, but it seemed to me that these wines were more to my liking. The interplay between sweetness, fruitiness and acidity is such an important part in a Riesling. And it seemed to work in most.

I also tried a bunch of 2012 dry Rieslings. I do think I still prefer the subtler style of 2011 over the stronger acidity-determined 2012s, but I found many of them surprisingly good. My range of assessing vintages is still very limited, so I cannot really compare or give advice on where this vintage lies (and, I also realize more and more that there are no good or bad vintages, it is more easier or harder vintages for the winemakers….or as a winemaker put it: There are no bad years, just bad winemakers.).

The guys at Mosel Fine Wines, whom I have come to trust quite a bit, think 2012 will be one of the great vintages when we look back in several years, especially for clean and juicy, i.e. fruity Kabinett and Spätlese (they see potential to play in the same league as the great vintages of the 1970s)…

Some shots from the harvest in Germany

Instead of the usual Sunday read, I want to just show you some photos from the end of the German wine harvest. The harvest is almost over now in Germany. German wineries often go through their vineyards several times during harvest, selecting the grapes for each particular style of wine. The longer the grapes hang, usually the higher the concentration leading up to shrivelled, mostly botrytized grapes that are used for the stars of sweet wines, Beerenauslese and Trockenbeerenauslese.

Nik Weis, the owner and winemaker of St. Urbanshof, a winery in the Saar valley, posted some photos the other day of their final stages of harvest and I asked him whether I could share them. I hope you find them as interesting as I did. It gives you an idea of how labor intensive just the collection of grapes for these very high end wines is, and how low yields are, which explains their high prices…

I have added some photos from the harvest in the prime Mosel vineyard Erdener Prälat, taken by my friend ManSoo, who harvested there with Dr. Hermann winery.

I am leaving for a few weeks in Germany the coming weekend, and I am excited about trying the 2012 vintage of my beloved Mosel and Sarr Rieslings as well as wine from new places for me: I will visit the Kistenmacher-Hengerer estate, a newly minted member of the elite winemaker association VDP, in Württemberg, a region I hardly know anything about, for example.

Another round of harvesting begins in Erdener Prälat 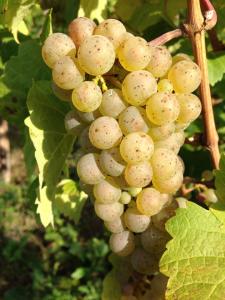 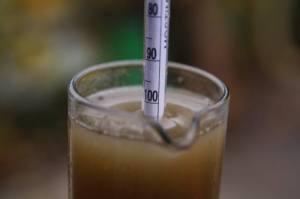 Once the grapes get crushed, this “must weight scale” shows the density of the must in degrees Oechsle, which determines what quality category a wine can be listed as.