Sunday Read: My Summer blogging series has come to an end…

My dear readers, Nina and I returned safely to A2, just in time for the opening game of football season (Nina got season tickets this year, I opted to invest my share into wine…duh). We had a marvelous trip to South East Asia, and finished it off with 28 hours in my beloved Seoul, where I lived for 5 months many years ago. It was a bag of mixed feelings, being back in that city after so many years, meeting old colleagues and eating true Korean food. Just a wonderful finish for this trip. As I mentioned before, we visited GranMonte Winery in Thailand, and I plan on writing about this estate in the near future.

Today, I want to pause a moment and do a retrospect on my summer guest blogging series. First of all, fellow writers, thank you so much for your contributions! I was blown away by your posts and the generosity with which you supplied them. It was totally heartwarming to site so many thousands of miles away in Thailand, Laos or Cambodia and see the posts come up…thank you.

Second, the series was a great success. It kept the visitor numbers pretty much stable throughout the summer, which is what I had hoped for and was glad to see. Some of the posts broke or came close to old records of mine: One post made the most likes I ever received on a post (Megan, your readers are very like-prone! :), another almost made my daily views record, yet another made it a first with a self-composed song…most importantly, the series kept the conversation going, as was visible through all the commenting on the posts.

Third, I thought the content was really great: The diversity of approaches to my theme “Somewhere, Beyond the Sea” showed what inspirational writers all of you are. I found the content to be enriching, educational and fun. To me, this is what wine writing and blogging in general is about. The most important key aspect for me, though, was to see how the personal sides of all writers shone through. It is the personality aspect, and bringing people together, which I liked most about this endeavor.

In case you missed any of the posts, here they are again, in chronological order. That should make for a long, long Sunday Read. It is good to be back home, and I am looking forward to taking up posting again. Thank you all, writers and readers, for your continued interest in my blog. It is a great place to be in.

Linda Foxworth: Beyond the Sea, Confined by Beauty

The Armchair Sommelier: Drinking Carmenère with the Devil

Cowboys and Crossbones: If this Wine Glass could talk

The Wine Raconteur: Torbreck “The Factor” 2001

Whine and Cheers: A Cuban and a Bottle of Carménère on Prince Edward Island

The Food and Wine Hedonist: While The Winegetter is Beyond the Sea…

Somewhere, beyond the Sea

This is the fourth post in my summer 2013 guest blogging series with the theme “Somewhere, Beyond the Sea”. Let me briefly introduce today’s blogger: Anatoli Levine, the man behind Talk-a-Vino. In his blog, that seems to have been around since the earliest days of wine blogging, Anatoli explores his passion for wine and everything surrounding it. He is a fountain of knowledge, and the saying among some of us that “following Anatoli’s advice means you’re on a good way” could not be truer. What impresses me most on his blog is the number 470. The current count of grapes he hast tried. Isn’t that amazing? I was excited when Anatoli offered me to republish this post which was originally written for the now-defunct Art of Life Magazine in 2011, because I do have a weak spot for rum. Thank you, Anatoli, for always broadening my horizon!

In this series exploring the world of liquid pleasures beyond wine , we already talked about Cognac, Scotch and Whiskey – is there anything else left in the world of spirits which deserves our attention? Yes, there are still quite a few things worth our attention. Particularly, today we will take a look at past and present of Rum.

Interestingly enough, Rum has probably most significant involvement into the history of humankind, more than any other spirit. Bold claim, you say? Let’s take a look.

History of Rum starts at around 1500s, when sugar cane was brought to Caribbean islands by Spanish conquistadors. Caribbean islands happened to have an ideal climate for growing the sugar cane, and the area became a big producer of sugar. After sugar is made, the retaining mass, called molasses, was still containing a lot of sugar. Mixed with water and left under the tropical sun, it was found to start fermenting. Once distilled, this is what became known as Rum.

Rum became a drink of choice for the sailors. During the long sea voyage, water supply was quickly getting spoiled with algae. In order to make water more palatable to drink, some amount of beer was added. Sometime in the middle of 17th century, the Rum started to make its way on board of Britain Royal Navy ships – it stayed as an official Royal Navy drink until 1970, even though the ration was quite diluted with water over time. As you might remember from the folklore, pirates also embraced Rum as their symbolic beverage, which finds its reflection even in the songs, such as “Yo ho ho and a bottle Rum”.

Sad part of the Rum’s history is related to the slave trade, a triangle of sorts. Molasses had being shipped to England, where they had being used to produce Rum. Rum then was sent to Africa, where it was exchanged for the slaves, which were in turn sent to Caribbean to work on sugar cane plantations. This triangle was broken with American Revolution. At about the same time, making sugar from beets became economically feasible in Europe, which reduced the need for cane sugar and subsequently lead to lesser production of molasses. Also Whiskey started to increase in popularity in United States. All these events lead to substantial drop in demand for Rum, reaching all times minimum in the first half of the 20th century.

Rum production and classification is not really regulated, as each Caribbean island has its own style of production. In general, Rum is made either from molasses or sugar cane juice, which is fermented with additional of water and different types of yeast. After fermentation, the liquid is distilled (again, there are no specific requirements for the number of distillations or the distillation methods). Once distilled, there are few choices for making the final product. If so called Light Rum is being produced, then different batches can be blended together to produce beverage with consistent taste. If Dark Rum is desired, process of ageing in the oak barrels will take place after distillation. Ageing can take anywhere from 3 to 23 or 25 years. After ageing, additional blending process is still possible, again, depending on the style. One more popular style is called Spiced Rum, which is produced by adding spices to so called Gold Rum, which is a lightly aged version of Light Rum. Both Light Rum and Spiced Rum are typically used in the cocktails, while Dark Rum are perfect for sipping in most of cases.

Practically all islands in Caribbean produce their own versions of Rum, with Appleton Estate being one of the most famous rums producers on Jamaica; Mount Gay Distillery is one of the most famous producers from Barbados, also probably one of the oldest in the world (operating from second half of the 17th century). Dominican Republic, Trinidad, Haiti, Guatemala and many other islands produce Rum of different styles and ever increasing quality. If you only had Rum in the cocktails until now, this is about the time to change it. Go find a bottle of 21 years old Zafra from Panama or 23 years old Ron Zacapa from Guatemala and see for yourself how good Rum might taste. Cheers! 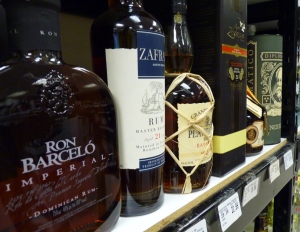 Linda Foxworth: Beyond the Sea; Confined by Beauty

This is the second installment of my guest blogging series “Somewhere, Beyond the Sea”. Today’s guest blogger is Linda Foxworth, of From Vinho Verde to Barolo with Love. I asked her to join the series because I believe she has a unique voice and approach as a writer. Linda is a weaver of words, using wines she has tasted to venture out further and draw conclusions, raise questions or just give helpful advice for general life. I find that approach particularly compelling. Take for example her beautiful post about how to remember all the different Italian wines, The Three Sisters of Veneto. Thank you, Linda! 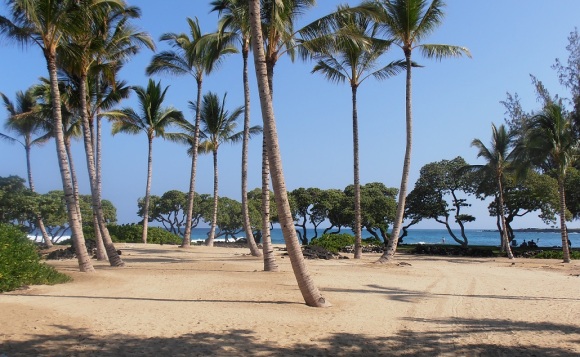 “What’s your favorite wine?”  I don’t know how anyone could ever answer that.  I’m all for a good ‘go-to’ wine, like a lovely Willamette Valley Corvallis Cellars Pinot Noir with its red fruit aromas peppered with nutmeg and orange, all nicely balanced, and when on sale can be had for $12.99.  I’ll stock up on that and tuck it away for those nights when I don’t want to swirl and sniff and write and pair.  You know those nights.  You’ve had them yourself.  You just want to sit down with a glass of wine that you already know will be good and you don’t have to analyze it to figure out why.  But does its ease and accessibility make it my favorite?  Certainly not.

Recently I came across an Austrian red, Blauer Zweigelt from the Niederösterreich region.  It had earthy aromas with some red fruit and a lot of  acidity which is not surprising since cold weather makes acidic grapes.  It wasn’t my favorite wine, but it was certainly worth trying. 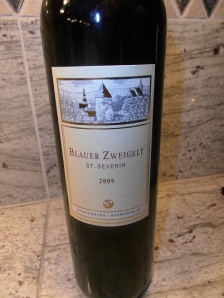 Last week I tried a still red Portuguese wine, Callabriga from Dao Region.  It’s made with Touriga Nacional, Tinta Roriz (two of the three primary grapes of Port,) and Alfrocheiro Preto.  Dark and deep in color the wine was full of flavors and aromas like violets, cherries, blackberry, plum, rosemary and cinnamon.  It was a strong wine, rich in flavor and heavy in tannins, but my favorite?  As much as I enjoyed it, I wouldn’t go that far. 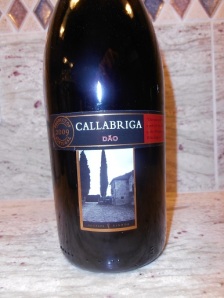 I love fortified wines and recently tried one from Greece, Hermes Mavrodaphne of Patras.  It had all the flavors you would expect from fortification, raisins, prunes and nuts.  The balance was good, though it wasn’t nearly as rich and delicious as a good Port.  But for an inexpensive, fortified wine, it was worth the price, though, again, not my favorite. 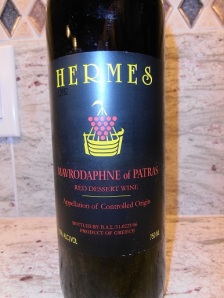 This spring I traveled to a beautiful island in the Pacific.  Everything about it was perfect, the air, the water, the flora, the gentle trade winds.  My husband and I began wondering what it would be like to live there.  We both came to the same conclusion.  As beautiful as it was, we’d feel stuck, because it’s an island the size of a small US state surrounded by water.  We’d never be able to jump into the car and drive away.  Leaving would always involve a trip to the airport.  That felt confining to me.  It seems like a funny conclusion to come to, however, paradise is a lovely place to visit, but I sure wouldn’t want to be stuck there.

As beautiful as any one wine is, I will never claim one as my favorite.  The most beautiful thing about wine is that there are so many of them to try!