As I mentioned in my introductory post to the Finger Lakes region last week, I received a box with five samples to try during the Finger Lakes Wine Month’s final virtual tasting held on Twitter and Facebook last Saturday. There were two Gewürztraminers, one Riesling, one Cabernet Sauvignon/Merlot blend and one Cabernet Franc in the box. Given that five bottles are a lot, and that I like company, I invited my friend John, The Food and Wine Hedonist, to come with his wife and share the fun. Then I found out that Jeff, The Drunken Cyclist, was also going to be in town, so I strong-armed him into joining us as well. Add in two friends who are also quite into wine and we had a party. We got some cheeses and different, thinly sliced bacon (including a lamb bacon) to go with the wines and naturally some baguette. It’s what we used to do all the time in Germany where wine, cheese, bacon and bread all were way cheaper than here…oh, the good old days.

The “virtual” in this tasting was achieved by us wine bloggers taking photos of the bottles and tweeting our first impressions out to the world. Some of the winemakers were also active on Twitter, so it was a nice back and forth at times. I do have to say that I did struggle a bit in the beginning, because it is an awful lot to handle: trying a wine, taking a photo, finding a half witty 140 letter post, posting it, reading what others post…it does become exhausting. Jeff was much more of a pro, but he’s also done it before. It was a lot of fun, though, all in all! 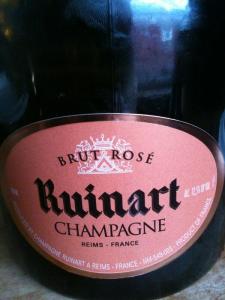 Jeff, in his capacity as #ChampagneSlut (a handle I like to add to his name on Twitter because he is very much into the bubbles) brought a bottle of Rose Champagne from Ruinart to begin with. By that, he saved me since somehow I had totally spaced what to start the tasting with…Now I am not much of a bubbles drinker, and am usually at a loss describing them. I think the bubbles occupy me too much to focus on flavors. But I can tell you that this Ruinart champagne was very good, nicely spicy. I thought the bubbles were a bit too aggressive, but what do I know? Everyone seemed to really like it and I enjoyed it quite a bit as well.

John had brought some Asian pork lettuce wraps, which we decided to pair with the two Gewürztraminers. And off we went into the tasting:

First up was the Glenora Wine Cellars 2012 Gewürztraminer. The winery is located at Seneca Lake and has been around since 1977. The wine had 13% ABV. It showed a surprisingly light color in the glass. The nose was beautiful: floral and perfumy, with some sweetness. A very typical Gewürztraminer nose in my book. On the palate, there were again floral aromas, and the wine was a tad heavier than I wanted it to be, but luckily it tasted less dry than advertised. I really believe the, still low, residual sugar helped this wine tremendously. Nice, lingering finish. It also paired exceptionally well with the lettuce wraps. This was definitely a crowd favorite of the evening! 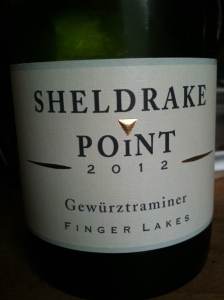 Next up: The Sheldrake Point Vineyard 2012 Gewürztraminer. Sheldrake Point Vineyard was founded in 1997 and is located at Cayuga Lake. This wine had 13.4% ABV. First off, let me say that I really liked the label. Most of the wineries’ labels this evening could benefit from less clutter and more modern appeal. Sheldrake Point definitely stood out positively! In the glass, we got a light colored wine. The nose was in stark contrast to Glenora’s wine: much more focused and clean, with just hints of Gewürztraminer aromas. This continued on the palate, which all in all was too subdued for me. There were pear aromas which I liked. But most of all, the wine had too much heat which made it seem unbalanced. You could really taste the 13.4% ABV, which were too much for me.

Up next, and now tasted with cheeses and bacon only, was the Swedish Hill Winery 2011 Dry Riesling. Swedish Hill is one of the larger producers in the Finger Lakes region and has been around since 1969. The wine had 11.5% ABV. It poured in a quite golden color, which I found rather exceptional in a dry Riesling, very pretty. The nose was a bit weird: It showed signs of petrol, which I usually don’t expect to find in young Rieslings, but not much else. I am not sure I would even have recognized the nose as Riesling. On the palate, the wine showed good acidity and very, very intense citrus aromas. I don’t think I ever came across a Riesling that was so decidedly citrussy. It was very refreshing, but maybe a bit one dimensional. There was agreement around the table that there might have been something wrong with the bottle, because there was what I can only describe as some funkiness going on…so, not entirely sure. But definitely an interesting tasting wine.

We then moved on to the reds: First up, the Stony Lonsesome Estates NV Cabernet Sauvignon/Merlot blend. On paper, this was an interesting experiment: It was blended from 54% Merlot and 46% Cabernet Sauvignon, with the Merlot coming from the 2010 vintage and the Cabernet from the 2011 vintage. The grapes were harvested from some of the oldest vines for their varieties in the Finger Lakes (both planted in 1982). Stony Lonesome Estates is one of three wineries (and a brewery) run by Three Brothers Wineries. The wine had 11% ABV. I was intrigued by the idea to blend two vintages for this wine, and I really wanted to like it. But when I tried it, I struggled: It poured in a surprisingly light color, which one would not expect from a Cab Sav and Merlot blend. It looked much more like a Pinot noir. The nose showed some nice fruit, but on the palate the wine just didn’t work for me. It tasted too sweet (despite the winery information stating it contains 0% of residual sugar), and I am not sure the varieties came through for me. It felt a bit all over the place and unfocused. I can see this as a summer afternoon wine, out on the patio, maybe slightly chilled. But I just could not see it achieving what the winemaker had hoped for, especially at the suggested retail price point. That was a bit sad. 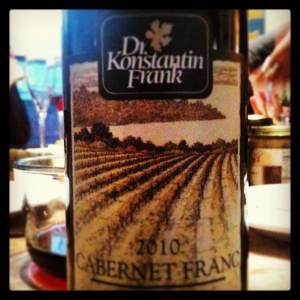 Last up came the Dr. Konstantin Frank Cabernet Sauvignon 2010. The wine clocked in at 12.8% ABV. As I explained in my introductory post, Dr. Frank is one of the leading wineries in the region. And boy did this wine shine! Great color, and a great herbal nose, branchy, earthy, just fabulous. Very old world style. Initially, it had a very earthy feel to it. It was greatly balanced and had a lingering, long finish. A bit later, the wine became much more fruity and that was a very pleasant surprise. This was a uniquely interesting and well made wine and seemed like a great fit for the region. Everyone at the table was very impressed. What a great finish to a fascinating tasting experience. I really want to go and explore the Finger Lakes more now that I have tasted some. Definitely worth investigating more.

To finish off the evening, we cracked open another bottle of Champagne provided by John, and two German Rieslings which I intend to write about in separate posts…it was a wonderful evening all around.