23 Comments
By the winegetter 2011, Germany, Rheinhessen 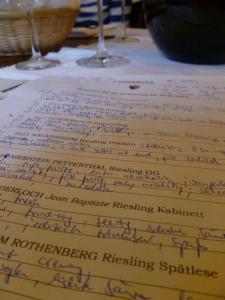 As promised in my piece about our wonderful tasting at Weingut Gunderloch that I published last week (if you missed it, check it out here), this installment brings you the tasting notes on the sweeter wines. Bear in mind that I am naturally a lot fonder of the sweeter versions in general.

From the flagship dry wines, the Grosses Gewächs (GG), we moved on to one of the most ubiquitous Gunderloch wines of all: the 2011 Gunderloch Jean Baptiste Riesling Kabinett. The wine is named after a character in Carl Zuckmayer’s “The Merry Vineyard”, a play from the 1920s. Zuckmayer was actually born in Nackenheim and the play was quite scandalous. The Jean Baptiste Gunderloch in the play is a winery owner with some twisted ideas about morality. Only in the 1950s and 1960s did Nackenheimers and Zuckmayer reconcile…but I digress. The wine is available all over the world: I have seen it in restaurants in Seoul, Korea in 2000 and I had it in Anchorage. It is the wine that made Gunderloch known to the more general public. I have tried pretty much every vintage since the early 2000s at our local wine festival. I started out really liking it but found the ones produced in the mid-2000s a bit wanting. But that’s enough of an introduction, let’s see how the 2011 fared: In the nose I got gooseberry and a nice freshness, probably carried by acidity. On the palate, it showed some moderate sweetness, was fruity with a nice acidity. I thought the vintage worked alright. There are definitely other Kabinetts out that offer more drinking fun, but at least this one is available widely.

We followed the Kabinett with the 2011 Nackenheim Rothenberg Riesling Spätlese (for those familiar with the German wine classification system we went in the right order, up a notch). According to Johannes, none of the grapes used for this wine were botrytized, which means they showed no signs of the noble rot that can get to grapes. In the nose, we got a great spontaneous fermentation nose that is initially a bit off-putting (because they smell a bit bad), but usually heralds great things for the glass. I got a lot of exotic fruits and the wine also smelled of cream. A very nice nose indeed. On the palate, it was really creamy and felt wonderfully balanced: some acidity, healthy sweetness, all in great symmetry. The best thing for me was its finish. My notes read: “loong, looooooong, very, very long”. It was just a beautiful rendition of a rich Spätlese. And unlike the GG from Rothenberg, this seemed quite accessible already.

In the classification scheme, what comes after a Spätlese? … Yes, an Auslese. So we followed that wine with the 2011 Nackenheim Rothenberg Riesling Auslese. Johannes told us that in contrast to the Spätlese, 100% of the grapes used for this wine had the noble rot on them. In the nose, I got mostly pineapple. The wine looked heavy in the glass. On the palate, there were minor signs of ripeness, thanks to to the botrytis. This Auslese distinguished itself by being nicely mild. There was a noticeable and welcome acidity (some winemakers struggled with the low amounts of acidity in that vintage). All in all the wine was warming and very expressive in a gentle way. Definitely different from a lot of Mosel Auslesen I know that can be overwhelming that young. This one was not out to be a rock star, rather it seemed to hold back a bit and just letting on that it is a great wine. It should be interesting to taste it in a couple of years.

The tanks holding Trockenbeerenauslese at Gunderloch

After that, we got lucky. As in seriously lucky: The photo above shows the three tanks that stood in the tasting room: two 190 liter tanks of Trockenbeerenauslese (TBA) and an 8 liter glass bulb full of single vineyard TBA from the Rothenberg. The unpronouncable Trockenbeerenauslese is the highest ranked and most rare of Germany’s wines (ice wine might be rarer, but I am not even sure it is). It literally translates to dry berry selection and that gives you an idea. The grapes are usually very shrivelled and picked individually. The juice you press from them is thick and syrupy, with concentrated sugars and low water to dilute it. The wines made from them are masterpieces, and take a long time to ferment. We had the tasting in late June, and the wines were still slowly fermenting. Johannes said they’d give them as much time as they need to finish the job. And he let us try some. 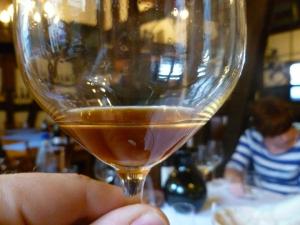 It is a rare occasion to try one of these, yet even rarer to try them at the winery while they are still fermenting. I remember, when we visited Dr. Hermann winery once in spring, Christian was just filtering the 20 liters of TBA he had made. And he proudly shared some of it with us. It makes you feel quite blessed when that happens. As you can see from the photo, the wine is of dark, dark amber color and highly viscous. In the nose, we got ripe plum and raisins. On the palate, it was still all over the place, which TBAs tend to be for quite a while after bottling, too, but there was definitely honey (which is a standard you taste in a TBA) and a nice spicy note to it. It was definitely exciting. Johannes said what every winemaker will tell you about their TBA: this one will be good in a hundred years. I am still looking for folks to either invite me to try a 100 year old TBA, or who are willing to wait it out with me. Should be fun. I already envy future generations!

23 thoughts on “Tasting at Gunderloch Part 2: The sweeter wines”