8 Comments
By the winegetter 2011, Germany, Mosel

Comparing Kabinett and Spätlese via 2011 wines by Weiser-Künstler 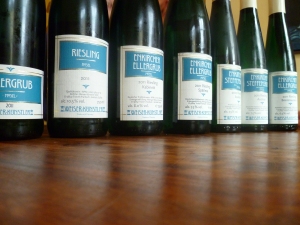 Way back in August when I wrote about my winery visit at Weiser-Künstler in Traben-Trarbach (see here), I promised to write a comparison of the kabinett and spätlese styles from the same vineyard, the Enkircher Ellergrub, because I feel like they show the difference in the two styles very well and it gives me a chance to explain these two a bit more.

Kabinett and spätlese are two levels in the German wine classification system, kabinett being the entry level wine with distinction (Qualitätswein mit Prädikat), and spätlese the next level. Technically, they are defined by the German Wine Act of 1972, and this classification is only based on the residual sugar in the grapes at harvest time (defined by degrees on the Oechsle scale). The winemakers measure that with a so-called refractometer in the vineyard, measuring the density of the grape juice that is dripped onto the instrument. When the grapes reach the required sugar level (Kabinett: minimum 70 degrees Oechsle for the Mosel; Spätlese minimum 76 degrees Oechsle for the Mosel), the winemaker can harvest them. That is why the different levels of distinction can come from one and the same vineyard. The winemaker simply harvests batches as they ripen. Usually, the more sugar in the grape, the longer the grapes where on the vine and exposed to the sun. But if it rains a lot, the grapes can also soak in more water and therefore have lower sugar levels, so rains at harvest time can be detrimental for the classification.

You might have noticed that the levels of distinction only know minimum values: 70 degrees for kabinett, and 76 for spätlese (both at the Mosel). That means that a winemaker can designate a wine a kabinett that technically could be labelled spätlese or even auslese. It happens frequently and has led to much confusion among wine drinkers. Now, why would a winemaker do that? With the temperatures continuously rising in Germany over the last decades, we have seen Oechsle measurements rising as well. In the 1970s, when the Wine Act was passed, 76 degrees oechsle was a lot. Nowadays, it is standard, and would be considered a low measurement. That puts winemakers in a bind. If you harvest too early, when the sugar content in the grape is still low, the grape is also not ripe, which leads to aromas in the wine that you really don’t want. But if you only produce auslesen, consumers and restaurants will not buy your wines,  because an auslese does not sell very well in a restaurant, being a typical dessert wine. So, a lot of winemakers have begun down-labelling their wines.

On the one hand, that is great for consumers, because you get wines that would normally be more expensive at the price of a kabinett. But on the other hand, it also produces heavy weight kabinetts, that have nothing in common with the lighter, fresher image that kabinett has. And that can be frustrating if you open a bottle with a certain expectation, and then find a spät- or even auslese in there. If you know what you get, that is fine, but if you have not had the wine before, it can ruin your plans with that bottle.

True kabinetts are remarkable wines, and it is harder and harder to find them. One of my favorite Mosel wine review teams (Moselfinewines, more on them in a separate post) lately admonished wine makers to produce these beauties again. They argued that it is easy these days to make spätlesen and auslesen, but that the true challenge is producing classical kabinett wines and that winemakers that want to shine, should focus on these, because there is definitely demand for them.

How much nicer is it, when you actually find two distinct wines in a winery portfolio that highlight the difference in the two wine styles in amazing precision. And that is where Konstantin Weiser of Weiser-Künstler comes in. He produced a very clean kabinett from the Enkircher Ellergrub and you can compare it with the spätlese from the same hill.

The 2011 Weiser-Künstler Enkircher Ellergrub Riesling Kabinett had a nose of spontaneous fermentation, something I will write about in another post in more depth. Suffice it to say that the wines initially are more smelly/stinky when poured than you expect, which levels out after a bit. On the palate, the wine was lean, with yellow fruits and enough acidity to carry it. The wine held a perfect balance of acidity and sugar and was just great to drink. It was refreshing and easy to drink.

The 2011 Weiser-Künstler Enkircher Ellergrub Riesling Spätlese, which just like the Kabinett was harvested from exclusively fully ripe grapes without any noble rot, in contrast already showed a higher viscosity in the glass with peach notes dominating. Upon reaching my palate, it became broad, filling out my whole mouth. It had a wonderfully silky texture, with strong aromas of peach and a nice level of acidity (impressive in the 2011s!). It had a long finish, and just showed wonderful elegance, beauty and depth.

What a difference a couple of degrees Oechsle can make…give both of them a try, if you get a chance.

PS: After writing this, I checked the Moselfinewine review, and apparently they are of the opinion that the Kabinett has a spätlese feel to it and the Spätlese an auslese feel…hmmm. I am not sure I agree, the tasting was back in June and my notes do not read that way. That said, they both got raving reviews: 93 points for the Kabinett and 92 for the Spätlese.