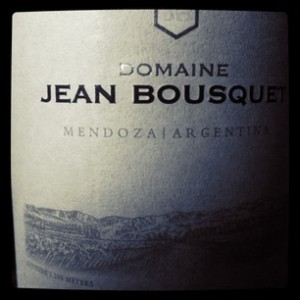 Another short wine review today, while working on bigger posts for the upcoming posts. Nina is a big fan of malbecs, so we acquired a number of them in the past months. I have no particular opinion on malbec, but there are times when I enjoy bold red wines, and malbecs can have that quality to them.

We received this particular bottle as a gift from friends. It was our first malbec by Domaine Jean Bousquet. The label says the wine was made with organically grown grapes in the Tupungato Valley of Argentina. The neck of the bottle is adorned with a sticker “Best Buy 89 Points Wine Enthusiast New Release”.

The website states that Jean Bousquet is a Frenchman who owned 120 hectares of vineyards around Carcassonne, France, before he bought 110 hectares (265 acres) in Tupungato Valley, Mendoza, Argentina in 1997 and planted vines there. The stated goal is to combine European winemaking with the terroir of Mendoza Valley.

The winery produces three lines of wines: Domaine Jean Bousquet as the estate wines with grapes grown on their property (with reserva and grand reserve), Santa Bax sparkling wines and Cameleon.

Our 2010 Domaine Jean Bousquet Malbec is the basic wine of their estate grown grapes. The website indicates that the 2010 vintage won several bronze medals in international contests. Apparently the 2009 vintage was very good, with a gold medal from Mundus Vini and the above mentioned Wine Enthusiast rating.

I will take this opportunity to state my disdain for this practice: I have no problem with bottles being marketed with prizes they actually won. But here, it is very clear that the Wine Enthusiast rating that is being advertised does not apply to the current vintage. The words “New Release”, which try to indicate that fact, are not very helpful. Ratings are problematic by themselves already, but slapping a rating on a bottle that does not apply to the current vintage (and not stating that fact in clear terms!) in my view is deceptive.

But on to the wine: It poured in a dark, ruby red. The nose was disappointingly green and alcoholic, rather prominent oak and unpleasant memories of cold mulled wine. On the palate, the wine was surprisingly medium bodied, with a nice jammy fruit of red berries with good acidity. It was better on the palate than the nose let on. The finish was short. The 14% ABV were not noticeable, it was easy to drink.

There was really nothing memorable about the wine. The wine seems to retail for around $11, which is an ok price for an unexciting, but drinkable wine. The nose was definitely off-putting and a downer.