Some may remember the Malbec tasting Nina and I hosted last month. We had so much fun that night, that in our drunken state of mind we all agreed to have another tasting soon. And so it was, last week, that the same group of friends gathered. We had agreed to make it a blind tasting and had chosen an area as wide as possible, European Reds, so that we could actually play around with the wines and no one would feel intimidated talking about them. Blind tastings can be a very humbling experience if you think you have some wine knowledge at least, and it is a great equalizer as everyone is free to associate as much as they want.

If you are contemplating a tasting with friends at home, here are some tips that I jotted down a while back but are still helpful, I believe.

We met at 6.30pm (I actually went earlier because I just had to play Wii with our hosts’ son). Everyone brought one bottle of wine, which added up to seven bottles because one fellow wino was sick. I had brought a Riesling to clean our palates with after the tasting, the 2003 von Hövel which I wrote about last week. One of our friends had volunteered to arrange the order of bottles and conduct the tasting so that all others were in the dark except for their own wines.

Because it worked, we had the first bottle of wine with a traditional Roman pasta dish, Pasta cacio e pepe. The first wine, a bottle of 2009 Banfi Chianti Classico (13% ABV, Italy – Sangiovese-based), poured in a medium, clear red color. The aroma intensity was on the lower end of moderate, and the wine smelled young. There was not much I could detect in the nose, very subdued. The wine tasted dry, was light with fresh acidity and low tannins which were fairly balanced. I got some cherries and an overall fresh note from this wine with medium length. I thought this was a decent light wine. My guess was a Sangiovese-based Italian, from 2010 or 2009.

Up next was a 2011 Pierre Chermette Beaujolais (France – Gamay-based), which poured in a pale to medium red and was slightly hazed. The nose was aromatic with some age, showing tobacco, cedar wood, hay and some grape aromas. The wine was dry and light bodied, with low tannins and moderate aromas. On the palate it had quite some unpleasant heat, hardly any fruit with a harsh and disappointing finish. It tasted like it had its best days way behind it. I did not care for this wine much, and guessed 2011 Northern France or Austrian wine. 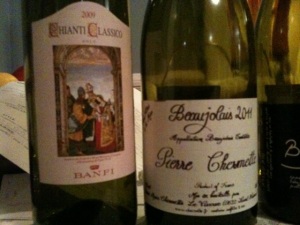 The third wine was a 2012 Domaine Pral Beaujolais nouveau (France – Gamay-based). It showed a medium ruby red in the glass. Its nose was young and aromatic, with red fruit, jammy raspberry, gooseberry, pear mustard and roses. Quite the nose!! On the palate this dry, medium bodied wine was smooth with medium tannins and great balance. It showed strawberry and red fruit aromas, was floral and had some red currant to it. There was some heat in the end which I did not care for too much, but it was a very yummy wine with a long finish. Very pleasing. My guess was a 2010 Northern French wine.

And up was wine number four: A bottle of 2009 Andrieux et Fils Gigondas Côtes du Rhone (14.5% ABV, France – Grenache, Syrah, Mograve). Of deep ruby red color, the nose was aromatic with some age, and had plum, coffee, earthy aromas and some dark chocolate. Very different from the last wine! The wine tasted dry, with a medium-full body, smooth acidity and medium to high tannins. All in all it was very balanced and flavorful, with a very long fresh finish. It was the most complex wine of the night thus far and impressed pretty much everyone (as far as I remember). My guess was a 2010 Côtes du Rhone.

The fifth wine, a 2010 Bodegas Ateca Atteca Old Vines (15% ABV, Spain – Garnacha), poured as a deep, ruby red and slightly hazy wine. The nose was aromatic, young and very weird: water colors, chalk, cherry and petrol. Not at all what I am used to, very intriguing. The medium bodied wine tasted dry with smooth acidity and medium to high tannins that were fairly well balanced. On the palate it was flavorful, with very ripe aromas, spice box, chocolate, and very juicy. There was a hint of residual sugar which made it absolutely fascinating. I liked this wine a lot, it was probably my favorite of the evening. Pretty early on, I decided in my head that this must be a Merlot from a Southern European area. Not sure about the age, but I kept yelling “This is a Merlot” across the table….

The sixth wine was a 2009 Az. Tilli  Concetto Terre di Chieti IGT (15% ABV, Italy – Merlot). It showed deep to dark ruby red with a slight haze. The aroma intensity was powerful, with berry compote and raisins. Very ripe, very impressive nose. I could have dove into this for longer. The wine was medium-full bodied, with fresh acidity and medium tannins, all very well balanced. On the palate, it had depth and was incredibly smooth, very likable with mostly red berry aromas. The finish was medium long. The Concetto is just a super yummy wine, I like it a lot. This one had to be a Merlot (by that point I knew that it was Nina’s wine, which she had bought in Germany at a wine store we both like with the one purpose of throwing it in at a blind tasting).

The final wine in the tasting was a bottle of 2008 M. Chapoutier Côtes du Roussillon Villages Domaine de la Bila-Haut L’esquerda (13.5%  ABV, France – Syrah, Grenache, Carignan). It was the wine I had brought, and it proved to be the most controversial. I had bought it during Wines Till Sold Out‘s big sale the week before and it arrived in the mail just in time. I did not have a chance to try it before this tasting. It poured in a very dark, almost purplish red. The nose turned pretty much everyone completely off, and I have to admit it was the most unpleasant nose I have come across in quite a while: dirt, sulphur, manure. That is all one got for the first 30 minutes. With a heavy emphasis on manure. It was, frankly, disgusting. I was very surprised,  had not expected that at all. After 30 minutes, there were some red fruit aromas fighting their way through, but it was still not enjoyable to smell. On the palate, the wine was extremely intense, mostly earthy. There was some cassis, but mostly dry, dusty earth aromas. I still defended it and want to see what it tastes like after an hour or two in the decanter (I have a couple more bottles). What I tasted at this tasting though, was not very enticing…

We finished the tasting, as is fast becoming a tradition, with a bottle of German Riesling Spätlese. I reviewed that wine over here.

Overall, I was very impressed with this tasting: Most of the wines were really good, and there were some really great surprises in it for me. We all played the guessing game, and it was fun. The best surprise though was a friend from Nina’s undergrad days who just began working in Detroit. He and a friend of his joined us for some of the wines later on and oh my God, did the friend of the friend play the guessing game. He nailed the last wine, and was pretty much spot on with the others he tried. That was really impressive! Time was just flying by and  I am sure I see another tasting in the not so distant future…