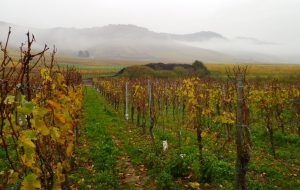 Somewhere along the Mosel, November 2013

I’ve spent the last five days at the Mosel, where I was lucky to taste 2012 Rieslings with some of my favorite producers, and new contacts. Most of these tastings were dedicated to the 2012 vintage, but it was hard not to talk about the 2013 harvest, which was just finished a few days or weeks ago, depending on the winery, so let me start with that.

2013 seems to have been a very difficult year: It started with low temperatures which led to late bud break and flowering, followed by a very dry summer. Some areas saw early summer hails that led to some areas remaining without any yield. Once harvest time came around, the weather started turning wet and rainy, which meant vintners and their staff had to time picking grapes quite well in order not to get grapes that were either too soaked with water or brought in a bunch of water.

All in all, 2013 seems to have reinforced the need for a lot of work in the vineyards throughout the year (e.g. cutting down grape clusters very early once it was clear that the ripening period was shorter). What I tasted from the barrel showed quite some acidity (as was to be expected from a very mixed weather year), but aromas seemed to be alright. Most winemakers lamented how low their yield was, but that they were fine with the result in the barrels. This is the third in the last four years that brought significantly lower yields than on average, and it could mean financial difficulties for some….for now, a lot of the wines are still bubbling, and it is wait and see.

But now to the 2012 vintage. Let me recap the growing conditions, with the help of Mosel Fine Wines (if you haven’t signed up for their free newsletters, go and do that now!):

March 2012 was unusually warm at the Mosel, which led to an early bud break. Through uneven weather conditions in June, the yields fell quite a bit and there was early rot due to a rainy July. Other than that, conditions were normal. And a standard September weather brought a quick rise in sugar levels, maintaining higher acidity levels as well. The October had cool nights which made the acidity remain rather high and grapes remained mostly clean with low levels of botrytis.

All in all a rather good year, with the problems of low yields arising from June and July.

I had not read much about other people’s assessments of this vintage, so I was excited to go and try for myself. As you may recall, 2011 along the Mosel was, for my taste, a bit too low in acidity. Back in June 2012 I wrote: “2011 (…) was a year with high yields and very, very healthy grapes. (…) Nina called (what we tried of the 2011s) subtle, I would add sophistication. They also showed great mellowness. Think of 2010 as a crazy, modern art painting and of 2011 as a well composed and pleasing piece of art.”

In retrospect, and having tried more 2011s, I think I am really struggling more than I realized back then with their low acidity. Which was good for the dry Rieslings, but made the fruity and sweeter styles more difficult.

The 2012, in contrast, cannot complain about too little acidity. The wines all showed a nice balance of healthy acidity and enough sweetness. They were light and elegant, and refreshing. I probably benefited from trying them longer after their bottling than the 2011s, but it seemed to me that these wines were more to my liking. The interplay between sweetness, fruitiness and acidity is such an important part in a Riesling. And it seemed to work in most.

I also tried a bunch of 2012 dry Rieslings. I do think I still prefer the subtler style of 2011 over the stronger acidity-determined 2012s, but I found many of them surprisingly good. My range of assessing vintages is still very limited, so I cannot really compare or give advice on where this vintage lies (and, I also realize more and more that there are no good or bad vintages, it is more easier or harder vintages for the winemakers….or as a winemaker put it: There are no bad years, just bad winemakers.).

The guys at Mosel Fine Wines, whom I have come to trust quite a bit, think 2012 will be one of the great vintages when we look back in several years, especially for clean and juicy, i.e. fruity Kabinett and Spätlese (they see potential to play in the same league as the great vintages of the 1970s)…

6 thoughts on “Minor Thoughts on the 2012 Mosel Riesling vintage”