The Food and Wine Hedonist: While The Winegetter is Beyond The Sea…

Somewhere, beyond the Sea

This is the final post in my summer guest blogging series “Somewhere, Beyond the Sea”. I am happy to present to you my friend John, The Food and Wine Hedonist , whom I was able to strongarm/pester/lure into writing something for this series. John,despite never writing about wine, is definitely a wine hedonist, at least given what I have seen of his cellar. He has been one of my earliest blogger friends and him residing in Ann Arbor has made us hang out a number of times already. He is definitely one of my coolest friends in A2. John’s blog, for those unfamiliar with his writing, is sometimes loud, mostly hilarious, often thoughtful and at times disgusting (Like when he talks about some of his man crushes or boy band choices). It’s a cornucopia of fun for sure…and he did not let me down with this post. Thanks, John! I’m already looking forward to seeing you soon….

The Winegetter asked if I’d be interested in submitting a guest post for him while he’s on vacation. In the two years that I’ve been blogging I’ve had a few people guest post for me but, oddly enough, I haven’t done any guest posts for anyone else. So when he asked me to do a post about wine based on the theme “Beyond The Sea” I jumped all over it. Well, as much as one can define responding 5 weeks later as “jumped.”

My immediate thoughts went to waxing eloquently about how I began my love affair with Rose wines at our very favorite beach destination in the world – St Barth’s. It’s a French-owned island in the Caribbean with gorgeous, undeveloped beaches. There are no cheesy tiki huts , shysters harassing you to go jetskiing, or people selling trinkets. In fact, there was only one beach on the island that had a hotel on it. The food there is absolutely divine with its strong French-influenced cuisine modified to tropical ingredients.

The island itself is accessible only by puddle jumper or ferry from St Martin.

I took this picture of Colombier beach from the puddle jumper

Or if you’re like Jay-Z and Beyonce who, along with many of the rich-and-famous who frequent the island, you take your pimped-out yacht.

But it’s expensive. VERY expensive. Like, we’re still paying off our trip from a few years ago expensive. For example, we had lunch at Eden Rock with a few drinks and walked away with a 180 Euro tab. But that’s also the beauty of the place. You won’t find ANY rubes in cut-off jeans and wife-beaters or pasty Midwesterners with fanny packs and white sneakers. And since everyone has money and they (in our case WRONGLY) assume you do, they don’t try to flaunt it. So you can be hanging out with Italian billionaires (which we did) and they didn’t care what you did for a living.

It was there that I gained my appreciation for Rose wine. We had it with every meal and it went perfectly with the weather, all the tropical ingredients, and even grilled meats. One day, Boom Boom (my wife) and I went to the beach with a new friend and proceeded to swig down six bottles of French Rose. I’d show pictures from that day, but this is a family blog. Maybe someday I’ll go into detail in my own site.

With my kids away at camp for two weeks, we were planning on making a return trip to our paradise. But we also just bought a new house, so any well of money that would go towards the trip has completely dried up. And you wouldn’t believe HOW PISSED I am that I can’t go. 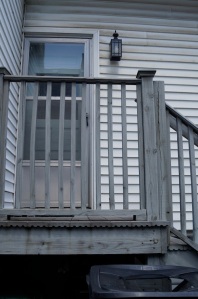 The first thing you encounter when entering Casa de Winegetter is the kitchen. 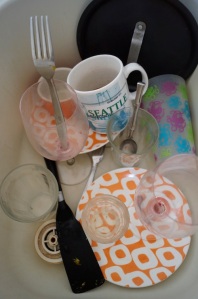 Dude, you gotta wash dishes before you on vacation.

Then I had to go to the bathroom as the previous night’s Indian food was coming back to haunt me. I’ll go ahead and spare you guys the picture of that mess. But I did get inspired by Geraldo Rivera’s recent foray into Tweeting a selfie. So here’s that picture. 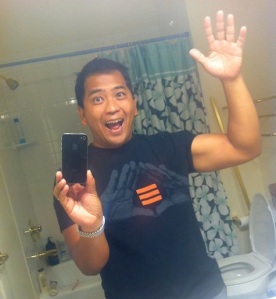 I did find his stash of beloved Schofferhofer – 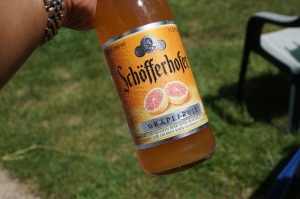 You don’t mind that I vanquished the last three, do you?

All that breaking-and-entering was exhausting, so I figured it was a good time to chill out and catch some rays!

Later that night we decided to have a few friends over to sample The Winegetter’s Reislings.

If the neighbors ask about the donkey, just play dumb…

Anyway, thanks Winegetter for giving me this opportunity to write this . And for leaving town!

PPS – Maybe this is why I don’t get asked to do many guest posts.