23 Comments
By the winegetter Guest Blogging

Somewhere, Beyond the Sea…

Somewhere, beyond the Sea…in this case: Zanzibar.

Many of you might know that I am a travel nut. In fact, Nina and I both are. For most of my life, I have felt miserable when coming home from a foreign trip. I usually dread being picked up at the airport, too, because unlike the pick uppers (is that a word?), I am usually not that happy to be back home. My parents used to pack me and my brother into the car pretty much every summer and we would make the 15 hour+ trek down to Lake Bolsena in Italy, where we would spend the next weeks camping. Those were my favorite weeks of the year. My aunt had an apartment in Spain, so we would also go there on occasion. When 12, I was put on a bus with my classmates to spend two weeks with a family in France, while barely speaking the language…it was scary, but awesome!! At age 16, I first traveled to the US and that never really stopped. Then, at age 23, I lived in Seoul, Korea for five months…you get the picture. 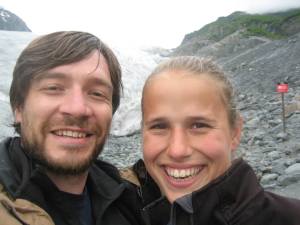 Having grown up in Alaska, Nina has that same hunger for going and living abroad (as many Alaskans have, which is something I came to realize over the last years). In the summer of 2008, we met in Botswana where we were both living and working for three months. After we got together (pretty much right after I left Botswana), I spent considerable time with her in Philadelphia, where she was pursuing her undergraduate degree. Upon her graduation in 2009, she moved to Germany and we spent two happy years in Trier, where we got married in September 2010 and traveled a lot: from Portugal to Switzerland, from France to the Czech Republic and so forth. In 2011, we were lucky enough to go on an archaeological dig (that is another story) in Kenya, right by Mount Kenya and later Mount Kilimanjaro. We tagged on our honeymoon on Zanzibar, an island in the Indian Ocean…

Crossing the Equator in Kenya, Summer 2011

As you can see, traveling has been a big part of our life together, and so it will be again this summer. As you are reading this, we are packing and getting ready for a two month trip to South East Asia, heading to Bangkok first to see good friends of ours, then on to Northern Thailand, Laos and Cambodia and venturing further South through Thailand, maybe to Singapore, hopefully to Indonesia. It is a trip that we have been wanting to take for a long time. And we finally felt ready for it. We haven’t really much planned out, which is part of this trip’s appeal. It is about experiencing the cultures, not ticking off places.

In the mayor of Pommard, France’s cellars, Summer 2010

But, you may rightly ask: Why am I telling you this (beside a rather blatant attempt at making you jealous)? Because given that we have no clue where we will be at any given time, let alone whether we have access to the internet, and given that it is unlikely that we will be drinking much wine (although we plan to visit a Thai winery or two – yes, they exist!), I was foreseeing quite the conundrum for my blog. After some pondering, I reached out to a number of bloggers whom you might be familiar with because they are active on my site and are writers and persons that I greatly appreciate. I asked them if they could imagine contributing a guest post to keep The Winegetter alive and active over the summer. And, lucky for me (and hopefully you!), almost everyone agreed pretty much  immediately. I am extremely grateful for this awesome community I have found. 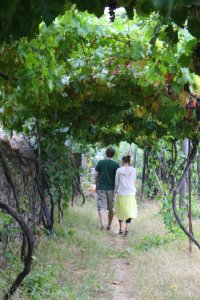 In the Douro valley, Portugal, Fall 2010

I have given this guest blogging series the theme “Somewhere, Beyond the Sea”, after the Frank Sinatra song. I have always loved this song and I think the topic is broad enough to give my guest bloggers the most leeway to explore it. I encouraged them to write about wine, but also told them they could approach the topic from any angle they want. The articles I have received so far are just what I wanted. I have enjoyed reading them and hope so will you. If you are not familiar with the guest bloggers’ blogs, I encourage you to check them out. They have given me so much to think about, laugh about and connect with over the last year, and my hope is they might be something for you as well…

The articles are set to appear pretty much once per week, sometimes twice. You will recognize them visually by the photo on top of this post, which will precede the articles with an introduction written by me. The series begins on July 3. I will try to sneak in some articles from our trip, but cannot promise when or whether this will happen. The Sunday Reads series has been stacked to last for a while, so you will still see content coming from me. Also, please forgive if I don’t reply to comments immediately. But I will definitely try to comment whenever I can.

So, with this, I bid you all farewell for a while, knowing my blog is in good hands. At the latest, I will be back beginning of September… Have a fabulous summer, wherever and with whomever you spend it!

23 thoughts on “Somewhere, Beyond the Sea…”