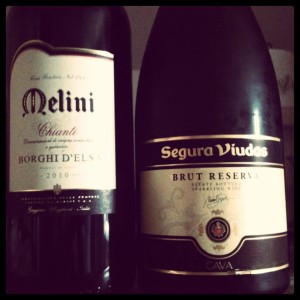 These are the two magnum bottles we’re taking to the feast. The Cava (a Spanish sparkler) will be pimped with Creme de Cassis to make Kir Royal.

This is my fifth Thanksgiving. I celebrated the first one in Louisville, KY in 2008, meeting Nina at the Chicago Airport and then heading on to my friends in the Bluegrass State. 2009 and 2010 was celebrated with our international bunch of friends in Trier, Germany at American friends’ of ours. We fried turkey both times and it is still my favorite way of preparing it. 2011, I had just arrived in AA a few days before heading to friends of ours’ here for a small Thanksgiving with them. This year, we are going to go to their house again, and some of their family will be there, too.

I have to say, Thanksgiving is probably my favorite holiday: tons of great food, no commercialized gift giving and stuff, just focused on food and company really. I have been able to successfully incorporate a German dish into the routine by now: Red cabbage (the red cabbage is marinated in red wine vinegar and then cooked with apples, onions, cloves, cinnamon and red wine). It goes amazingly well with turkey and mashed potatoes. Nina loves it, and I always liked this savory, sweet and sour dish.