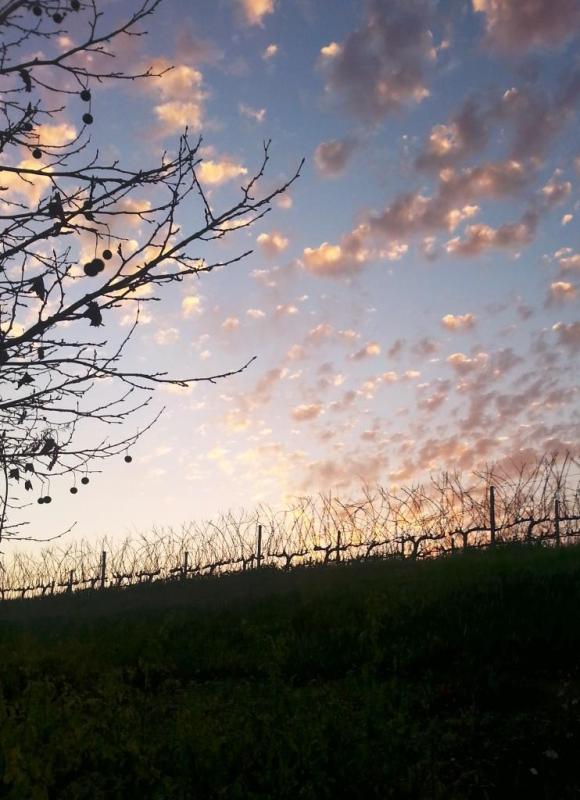 Entering the estate in the evening

It is hard not to notice the size of Kleine Zalze’s business endeavors as you enter the compound through a security gate: To your left, you find rows of apartments, there is a lodge, and in the distance is a golf course operated by Kleine Zalze, but at the heart of these operations, geographically and by importance, is its winery.

Kleine Zalze was founded in 1685 and was purchased by the current owners Kobus and Mariette Basson in 1996. Its production is 720,000 bottles per year. The winery has between 50 and 60 hectares under vine, but it also buys grapes from 23 suppliers that have long-term contracts with Kleine Zalze. This stems from the simple fact that some grapes are simply not suited for Kleine Zalze’s holdings (like Sauvignon blanc), but are seen as essential by the owners for their portfolio. These contract growers are spread out over the Cape, with some over 400 km away from Stellenbosch. The logistics of this seemed to be quite intense, with regular inspections at the vineyards and then bringing the grapes in cooling vans to Stellenbosch so that they don’t start fermenting after picking. I know that this practice is common in many wine regions, but I think it was the first time I got to talk with a winemaker about the logistics. 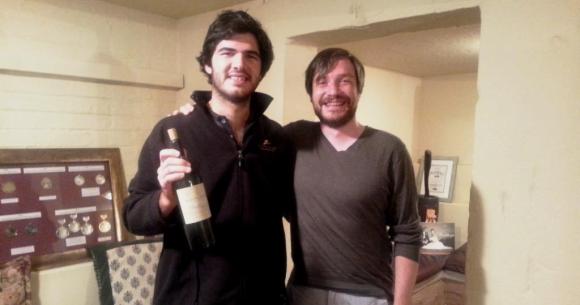 Dirk van Zyl is an assistant winemaker and vineyard manager at Kleine Zalze. His family owns a small winery, so it was natural for him to go into the wine business. At Kleine Zalze, he is in charge of integrating vineyard management and winemaking. This means that a big part of his job is driving to the contract growers and inspecting their vineyards, adjusting methods and doing what is necessary there. In the cellar, he is involved in all areas of winemaking. Dirk very clearly loves his job, and he loves working at Kleine Zalze. When I asked him about future plans, he told me he wants to stay with Kleine Zalze as long as he can to learn more about different vineyard sites and cellaring methods. Eventually, he plans to return to the family farm but not for now.

Kleine Zalze produces three lines of wines (a practice that seems common in the Stellenbosch region): the Cellar Selection, which is meant for early drinking with usually low use of oak and more fruity in taste; the Vineyard Selection as the middle tier of quality, in which all white wines are barreled; and the Family Reserve, which is their highest tier. 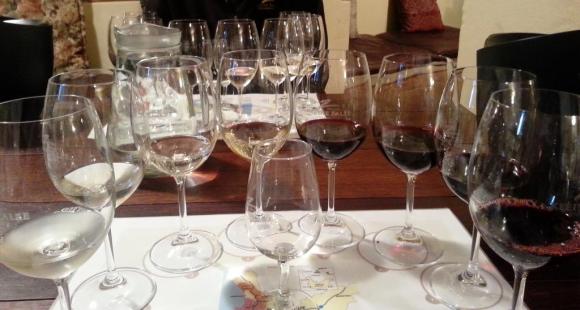 Our line up for the night

I will focus these reviews on the high end wines for the sake of readability, but I want to point out the two whites we tasted of the Cellar Selection, a 2014 Sauvignon blanc and a 2014 Chenin blanc, which were both great easy drinking wines. The Sauvignon blanc was fruity with great acidity, and the Chenin blanc struck me with its fruit mix of guava, gooseberry and peach.

The 2012 Sauvignon blanc Family Reserve spent 12 months on the lees in stainless steel and is meant to be more in an Old World style. The color was slightly golden, and the nose was intriguing: full aromas of tropical fruit (and some banana?) and honey, with some acidity noticeable in the nose already. Most of all there was something that reminded of an older Riesling. I couldn’t nail it down to what it was, but definitely intriguing. Its mouthfeel was nicely velvety, much heavier than the Cellar Selection. Aroma-wise, I got gooseberry and green pepper, but all in all it was rather restrained, which wasn’t a bad thing. It was nice mixture of soft and muscular, with good acidity and a nice finish to it.

The 2012 Chenin blanc Family Reserve was the maiden vintage for this line’s Chenin blanc. The grapes come from three sites in Stellenbosch, which all have different soil types (granite, decomposed shell, and sand and clay mix). Vinification begins in stainless steel and then the wine spends one year on the lees in first and second fill barrels. The color was golden, and the nose quite expressive and complex. There was tons of tropical fruit (probably pineapple most prominently). On the palate, you could taste a bunch of minerality, acidity was again spot on, and the wine was creamy and balanced with an elegant finish. Everything was well made in this wine, but somehow it didn’t touch me the way it probably should have. It probably needs more time to age.

And two of the whites we tried…

The 2010 Shiraz Family Reserve was made from grapes from one block which contains three different soil types which produce different kinds of grapes: some with thicker skins, others with thinner skin and therefore less tannin potential. The batches are fermented separately, some in open cement containers, and then are blended afterwards. The color was a dark ruby red, and the nose was intense and concentrated, with chocolate and coffee aromas. Nina and I both loved how well integrated the wine tasted: it was grippy with great tannins that held it all together, with dark fruit aromas and a long finish. The balance of it all was great. When I just checked Nina’s notes, I saw a smiling face beside this wine. Mine has a bunch of plusses. A total winner.

The 2008 Cabernet Sauvignon Family Reserve we tried comes from one block in Stellenbosch and is aged in first fill barrels for 26 months. The nose of the wine was complex and very intense, almost aggressively so. I picked up boiled green peppers, bitter chocolate and what I would describe as tomato stalks (have you ever smelled them?). Nina’s notes read pencil shavings and spice with lots of red fruit. On the palate, despite its age, the 2008 was still very firm and closed, with restrained fruit, and still a bunch of green aromas. It was very hard to assess at this stage because it didn’t really want to come out of its shell. When I voiced some frustration about this, and that I would love to try it again in three years, Dirk got up and told us to wait. He came back with a bottle of 2005 Cabernet Sauvignon Family Reserve that had been opened a few days before! While the nose was pretty much gone, just a whiff of prunes left, the flavor worked on this one: great tannins and what I would describe as port wine like flavors (fortified, prunes, sweet cherry). It was succulent and full, enticing and alluring. All of that topped by a long finish. This was an impressive wine, and it did give an idea of where the 2008 might be headed…if that’s the case, there’s some good times ahead for it…and what a great way to finish the tasting.

If you visit the estate, make sure you book lunch or dinner at Terroir, the restaurant on the estate. The food is exquisite and very well prepared. A must for me in Stellenbosch.

Sunday Read: Which is more important for Fine Wine, Terroir or Technique?

Fine wines and premium Scotch too!

Disclaimer: I entered into a tentative agreement with the online wine retailer Wine Chateau under which they sponsor two of my posts per month. Wine Chateau has no influence on the topic I select for the post or its content. Opinions expressed are all mine.

Steve Heimoff published this excellent article, which becomes even better as you read the comments, in May and it has been sitting on my Sunday Read list for a while now…

As terroir is still one of the buzz words in the wine world, and as I for one am a proponent of it (remember my waxing poetically about how I can recognize a Scharzhofberger? Or how much I love an Erdener Treppchen, no matter who made the wine?), it is still a delicate question. How does one detect terroir in the first place? And does a good plot of land automatically mean a good wine (as the Premier and Grand Cru in Burgundy or the Classification in Bordeaux suggest)? But what about the winemaker?

These are interesting questions, and Steve Heimoff delves into them quite well, trying to find a balance.

Steve Heimoff: Which is more important for fine wine, terroir or technique?