A man in his element.

While we’re currently in Piemonte, this winery and winemaker profile begins in August 2014 at the Mosel:

Nina and I were on our way back to Mainz from a week spent in Burgundy with my high school host family, which really is my second European family. It’s hard for us to drive so close by the Mosel and not stop, so we had made plans to see friends in Trier on the way and then head up to one of our favorite wineries along the Mittelmosel, Weingut Karl Erbes, to see our good friend Stefan, the owner and winemaker. The tasting was set for 10 am, which is the usual for us and Stefan, don’t ask…As we approached the tasting room, Stefan came outside and, after a hug, told me there were three winemakers from Piemonte in his tasting room, and none of them spoke any German or English, and since I speak some Italian, he decided I could translate. I must have been hung over or exhausted, because I immediately agreed, after having spoken French for a week, and with only a year of college Italian under my belt. Let me say it was not the easiest task I had picked: The three guys, one of whom turned out not to be a winemaker, but the other two were from Barolo and just south of Asti, peppered Stefan with technical questions and nothing in my life had prepared me for translating them: From free and not free (???) sulphur levels to soil composition and winemaking techniques I had never heard of. I was sweating after ten minutes. However, three hours, a cellar and vineyard tour as well as roughly 20 Rieslings later, and with the Italians pleading to stop the tasting (they still had to get back on their motorbikes), we’d formed a bond. One of the winemakers scribbled his name and telephone number on a scrap of paper, also the name of the other winemaker, and told me that “that guy has email”. Handing me the scrap, he told me to get in touch if we ever make it to Piemonte.

Fast forward to February 2015 and we find an Emirates flight from New York to Milan for less than USD 400 round trip and all of a sudden Piemonte is on the map. I start searching for the scrap of paper, to no avail, and a few weeks later, just before we’re about to get going, Nina finds it (one of the reasons I married her!). I googled the two names, Ezio Cerruti and Giuseppe Rinaldi, and lo and behold do find Ezio’s email address online and shoot off an email in Italian. He responds within a day, tells me he’s mostly not in Piemonte during our visit, but could make time for us our first day in the afternoon.

Once in Piemonte, we’d done our research, and from our apartment it should be about 30 minutes to Ezio’s winery. Unfortunately, since we’re in Italy, there was a closed road and we had to turn around and drive around the whole hill which cost us dearly and by the time we get to the winery we’re 25 minutes late. The German in me cringed. But all embarrassment disappeared when I saw Ezio storm out of his home, arms wide, with a big grin. He gave us hugs and it was clear we’re good old friends, and according to Italian time, we were on time anyway. I hate being so German at times… He had also asked his US importer, Summer of Indie Wineries, to join us, and man, was I glad she was there to translate (and as we got to know each other also for her insight and wonderfulness). Clearly, my Italian in Germany had not impressed Ezio, but I was more than happy for the help!

We began by sitting on his terrace, looking over vineyards, catching up over a cup of espresso, and discussed life and travel. Ezio is a character, totally and always himself, and whenever I meet people like this, I just want to stick around longer (and eventually married one of them). He is a man of many shades, and we discussed the fact that he has never flown in his life and has zero intention to, while at the same time he drives his motorcycle all over Europe, has moved from one room into another in his family home, never lived anywhere else, and yet has a sign hanging above his head that reads: “He who experiments might lose, he who doesn’t experiment has already lost.” Talk about contrasts…

Eventually, we headed to the cellar, which is located under his family home. The old, steel-concrete harvesting facilities are still there, including the filters, but the rooms were renovated in a modern, understated style a couple of years ago. Behind the main room, which serves as the tasting room, lies his cellar: about 30 small barrels and five big barrels. And that’s it. I was stunned to see on what small scale he operates. Ezio wants to know exactly what is going on with every single barrel at any time, so he prides himself in small scale: 5,000 bottles of passito, the sweet wine, every year, and maybe a total of 20,000, 25,000 bottles a year. All Moscato. In 2014, he couldn’t make any passito due to weather, and made barely 4,000 bottles of his normal Moscato. And that’s about it. Can you imagine?

When one of us mentioned that a cellar is full of blood, sweat, and tears, Ezio insisted not in his cellar. There it’s only sex, drugs, and rock and roll. I like that guy, I really do.

We began our tasting with his 2014 dry Moscato named Fol. The wine has been moved from the barrels and is currently in a different container, settling, and getting ready for bottling sometime this month. And yes, you read that right: dry Moscato. Winemakers in the region are firm in the belief that Moscato needs sugar to cloak the bitterness they claim is inherent in the grape. When Ezio decided to make a dry Moscato, they called him crazy and he named the wine accordingly (“fol” is “crazy” in the local dialect). The wine was stunning, and I’d never had any Moscato like it before for sure: The nose full of nectarines and lots of floral aromas, mostly lavender. On the palate, the acidity was strong and fresh, I got lots of grapefruit aromas, and it was a bit yeasty in the end, a bread-kind of yeastiness. The best thing was indeed a very slight bitter note, but more the bitter of the white skin in grapefruits, not at all disturbing but enhancing this fascinating wine. The “wows”
were flying freely. I cursed him for not having bottled it yet, I would have made room for a bunch of bottles in our limited luggage space.

From there, we went on to his passito-style Moscato wines named Sol, his signature wines. We tried several vintages, and began with the 2009 (which was bottled in 2013). 120 grams of residual sugar (RS) sound intimidating, but it really wasn’t too much: The wine had fresh acidity, some musty aromas, but mostly pear and honey. It was incredibly fresh for this sweetness level, and the best thing was a hint of salt that gave it a certain edge. I liked it a lot! The 2010, which we tried after, has only 100 grams of RS, and has more acidity. Ezio thought it needed a couple more warm months in the bottle to reach its full potential. I thought it was already singing: much fresher than the 2009 (which I already considered fresh), intense, intense aromas of honey, licorice, orange, and sage, again this saltiness, but also with a great and refreshing bitterness in the finish. Just a hint, again adding to the wine. This was amazing, really amazing. After the 2010, he had us try a 2007, mainly to show us how he and his winemaking style changed after both his parents died in 2007 and 2008. 2007 was a very warm year, so always a bit difficult for sweet wines, because the lack of acidity can be a problem. In this case, the wine definitely showed lower acidity, but it also felt a lot creamier. It was sweeter and more in line with other passitos I have had, which are sweet, but can lack personality. It was a good wine for sure, but doesn’t come close to the 2009 and 2010.

As a last treat, Ezio opened a 2010 Moscato Passito Botrytis, a wine he has made since 2005 with only botrytized grapes. He used 3 grams of sulphur per 100 liters (an insanely low amount), which are all gone by the time fermentation are over. Nothing is done to prop up its color or aromas. It spent 4 years in the barrel and 7 months in the bottle. And man, what a treat: An abundance of apricots, freshly cut, that were layered on whipped cream, along with some herbs….but also so much more. It was one of those wines that makes you want to stop use descriptors and just dive into and never let go. The nose enchanted and held us, and the wine itself just startled us. I have had many botrytized wines before in Germany, but nothing like it. It was a different kind of botrytis, less honey, more primary fruit. Hard to describe. Just incredible.

After a good 2 1/2 hours, and not before Ezio had arranged another tasting for us in Barolo, we parted ways, a few of his half bottles in tow. We’d come to Piemonte not for its Moscato, but Ezio proved us wrong. And what a great time we had. We cannot wait to come back. 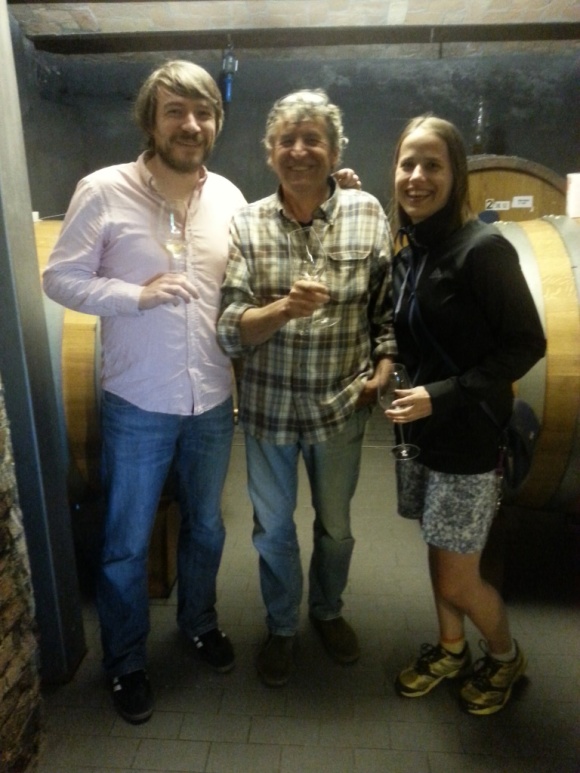