It had been way too long since we conducted one of our fairly regular wine tastings with friends. The rules are always the same: The host sets a topic (we did “European Reds“, “Strange Fruit“, “French and Argentinian Malbecs“, “Michigan vs. Mosel” and others in the past; you can find links to all of them here), and then guests bring a wine bottle each. The wines are usually accompanied by cheeses and meats, and as of late we try to taste them blindly.

Two of our friends had to move out of town for work, so we had been missing them dearly. When one of them came to town for a visit, we made sure to have a tasting. Since I was hosting, I had the honor of setting the rules. I called the tasting “Unexpected Pinot Noirs” and explained that I would like to try Pinot not from France or the U.S. usual suspects Oregon and California (but guests were free to ignore that rule). I am a huge fan of Pinot Noir and was looking for a chance to expand my palate.

We paired the wines with cheeses and meats from my local go to sausage maker Biercamp. These guys just know what they are doing: I got several bacons thinly sliced, including duck and lamb bacon, a wonderful garlic and herbs de Provence sausage with a nice kick, as well as smoke sticks from them. Delicious pairing options for sure.

Blind tasting has its own trappings, and I am always a bit weary of it because it is the most humbling experience you can imagine. You try to whittle down where the wine is from, and while doing that more often than not I convince myself that it is a particular style or region or vintage and then look for arguments to support that, thus closing off my mind. Nina tends to be way better than me at picking up nuances and determining characteristics about wine. She definitely owns me in blind tastings, and so it was with this one: 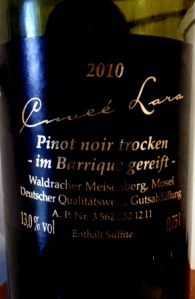 A Pinot from the Ruwer valley

The first wine we tried was a German Pinot Noir (called Spätburgunder, literally “late Burgundy”), a 2010 Heinrich Mertes Waldracher Meisenberg Cuveé Lara. My friend Mansoo had sent me this bottle a while back (as well as the other bottle we entered into the race), and I was eager to try it. Heinrich Mertes winery is located in the Ruwer valley, a small tributary to the Mosel river. The wine showed a medium-light red color. The nose was perfumy with currants and some heat. It wasn’t exciting at all. The heat was actually quite disturbing. On the palate, though, this wine shone: raspberry, red currant and tobacco aromas, and an awesome kick of acidity. The puzzling and intriguing thing about this wine was that the fruit tasted very ripe, yet the acidity kept it wonderfully fresh. This was a strong beginning. The nose not so much, but the flavor profile was awesome. For me, the acidity gave it away: Because I knew there was a 2010 from Germany in the race, a year with quite high acidity in general, I took my chances and guessed right (so did Nina).

Quite the label, huh?

Next up, a 2007 Arno Kruft Veldenzer Grafschafter Sonnenberg from the Mosel (our second entry). The color was in stark contrast to the first wine: dark, purplish red. The nose showed wet dirt, some rotting branches and what others described as compost aromas. Not very pleasant. I think the compost descriptor came from hyper-ripe fruit aromas, but I couldn’t nail down which fruit. On the palate, the first noticeable thing was that it was way chewier than the first wine. It also was somewhat smoky, with cherries and cranberry aromas as well as a bit of vanilla. In my mind, this was totally a new world Pinot with a lot of the characteristics I have encountered in some California Pinot Noir: too potent, too strong, no restraint. But I want my Pinot Noir less potent, less strong and with more restraint. I did not like this wine. I guessed it was from somewhere pretty warm, and definitely new world. Boy was I wrong. 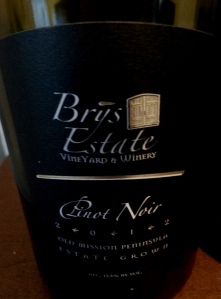 The third wine of the evening was a 2012 Brys Estate Old Mission Peninsula Pinot Noir from Michigan. Apparently, Michigan winemakers consider 2012 one of the best Pinot Noir vintages yet, so this should be exciting. The color on this one was gorgeous: a red currant red, darker than wine 1, much lighter than wine 2. The nose was flowery, with some strawberry, rather intense smoke, but seemed quite closed at this point. On the palate, the wine felt creamy and heavy, which gave it a wonderful mouthfeel. But it is a mouthfeel I don’t expect or particularly cherish in a Pinot Noir, which I want more light footed and delicate. Still a solid showing. Nina guessed Michigan correctly, I had no clue. 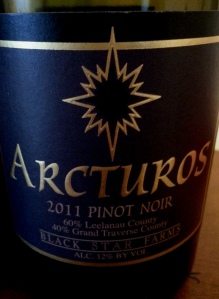 Up next, a 2011 Black Star Farms Arcturos  Pinot Noir, also from Michigan. Again, the color was spectacular, a bright and shiny red currant. The nose was full of roses, almonds and cedar wood, with hints of red berries. I thought the nose was gorgeous. The palate also started off nicely, with spice and pepper aromas, and a light footed feel to it. But then the palate turned out to be a bit harsh: There were bitter aromas kicking in that were rather striking. It also felt like the wine had a bit too much alcohol (which was not the case, we checked later and it clocked in at only 12% ABV, but felt more like 14), and that really turned me off. I couldn’t get over the harshness in the wine. My guess was, because of the perceived high alcohol, a warm climate wine, maybe Southern Italy. 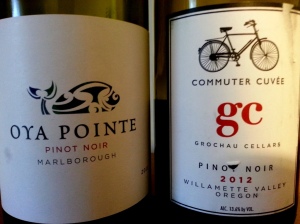 A New Zealand surprise and an Oregon Pinot

Second to last came a 2011 Oya Pointe Pinot Noir from New Zealand’s Marlborough Valley. New Zealand has definitely gained some serious street cred for its Pinot production. The color was similar to the previous wine, and the nose was awesome: strawberry jam with rosemary and sage aromas. It was crazy, but good crazy! I loved it. The palate was very herbal as well, thyme, rosemary and sage aromas, with strong acidity with some iron aromas, great lightness to it and some red berries. This was very unique and therefore impressive wine. I hadn’t come across such an herbal Pinot before. This was an exciting wine. Because of the iron aroma that I had come across before in an Oregon Pinot Noir, I decided to guess Oregon…

The final wine was a 2012 Grochau Cellars Commuter Cuveé Pinot Noir from Oregon’s Willamette Valley. The color was more purplish, maybe black currant. The nose was chalky, intensely perfumy, with cocoa aromas. On the palate, the wine seemed rather bland: some cherries, some strawberries, plum, not very expressive though. Straight-out fruit forward style, but all a bit thin. I would not have recognized it as a Pinot Noir if I hadn’t know it had to be one, maybe more of a Grenache or so. I just didn’t find much that excited me about this wine. Not bad, but quite standard. My guess, because it was a bit heavy, was California.

Combined with the others rankings (6 points for favorite down to 1 point for least favorite), this is the likability ranking:

The tasting was fun, and it was kind of interesting to have a German Pinot Noir ranked first and last. The Heinrich Mertes was just such a great expression of the grape, to me it was a rather easy winner. The New Zealand Pinot Noir was unique in a good way, expressing some aromas that were unfamiliar, yet seemed befitting to the grape. 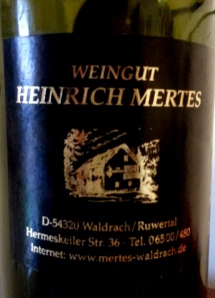