Tag Archives: how to make Zuckerhut 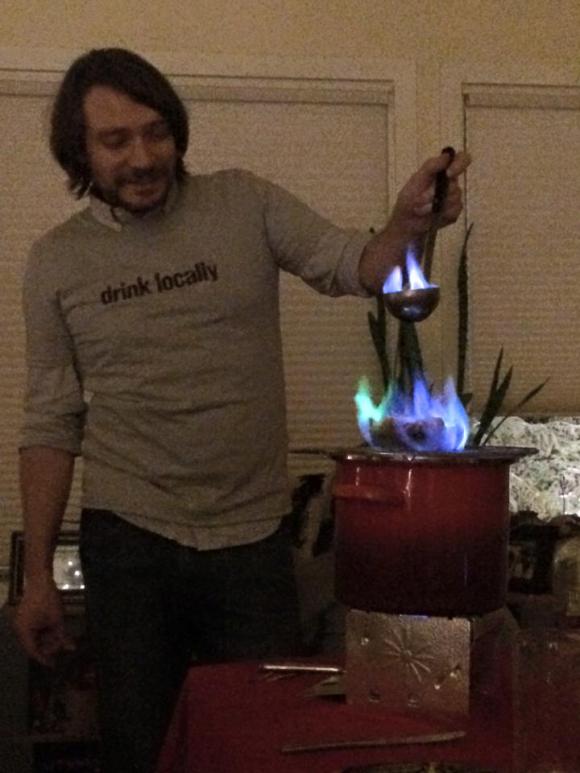 I’ve written about the German winter tradition Feuerzangenbowle (aka “fire tongue punch”) before. In my post last year, I explained (eerily familiar these days when you look at the East Coast):

“Yet another “polar vortex” sweeping the Midwest is giving me a chance to write a post that I thought would have to wait until next winter. I meant to write it before Christmas, but then life got in between. So I relish this chance that Mother Nature has provided me with. Why could I only write this post in utter cold? Because of tradition…but let me begin:

If you type “Feuerzangenbowle” into Google, you will find a gazillion of hits for this term. Other bloggers, like John The Food and Wine Hedonist and Julian of Vino in Love, have written about it before, so I want to keep the intro part rather short. Feuerzangenbowle, usually translated as “Fire Tongue Punch”, is a German winter tradition. Most English-speakers are familiar with “Glühwein” aka mulled wine, and Feuerzangenbowle is an extension of mulled wine.” To be more precise, it’s pimped version of mulled wine.

If current weather conditions make you want to throw a party and impress your guests with a show of fire and light as well as a tasty mulled wine, this is what you need: a burner, mulled wine, sugar loafs or hats (in German: Zuckerhut), some metal rack (to set the sugar onto), minimum 50 proof rum, a metal ladle, and a lighter. The final product will be sugar drenched in rum that is lit up sitting atop a pot of mulled wine. It makes for quite the spectacle.

First up, you need some form of hardened sugar. In Germany, we use a Zuckerhut, a cone shaped loaf of sugar that fits perfectly on the tongues that are used to hold it above the mulled wine. It’s hard or expensive to get them in Germany, and I have experimented a lot with how to replace it. We’re throwing at least one Feuerzangenbowle party in Alaska each year, and usually one in Ann Arbor as well (like this past weekend). Initially, I played with adding a bunch of water to sugar and then putting it into the oven at a rather low temperature. The problem with that is that it can caramelize the sugar and then it burns down much harder (as happened to me this year in Alaska, where the sugar was so hard that the flames turned into a greenish color – pretty, but not what you want).

When I told Nina my dilemma, she did a Google search and found the perfect solution: a Youtube video. Not that I couldn’t have thought of that. The three minute video shows how easy it is to make your own sugar cones. Mix a cup of sugar with a teaspoon of water. Mix well with a fork, the sugar will resemble damp sand. Then take a champagne or beer flute or martini glass, put in a third of the sugar, use a muddler to press the sugar firmly, criss-cross the top of the sugar with the fork to loosen it a bit and ensure the next round will stick to this round, add another third of sugar, repeat and repeat again. Then flip the glass on parchment paper, tap the glass, and let it sit over night. It worked perfectly! I was very happy with the consistency of this cone, just right.

For the mulled wine, combine a box of Franzia Zinfandel (or any other cheap wine of choice) with 8 sticks of cinnamon, three oranges and three lemons cut in wheels, and some vanilla aroma. Heat up, but don’t let it boil (it will ruin the flavor).

When everything is ready, put the wine pot on a burner, set up the rack on top of the pot, put a cone or two on the rack (I use two cones of a cup of sugar each per wine box of 5 liters). Dim the lights in the room. Pour rum over the cones to drench them. Pour rum in the ladle and light it up. Pour the burning rum over the cones. You might need to light up the cones separately to get them started. Once they are burning, add more rum as you see fit. The sugar will drip into the mulled wine, there will be small fires of rum and sugar sitting on top of the mulled wine, giving the orange and lemon wheels a nice burn. Once the sugar is burned down after a couple of minutes, remove the rack, and start serving the mulled wine.

The mix is potent, so watch out. But it’s also SO good. Here’s to getting through the winter in style! 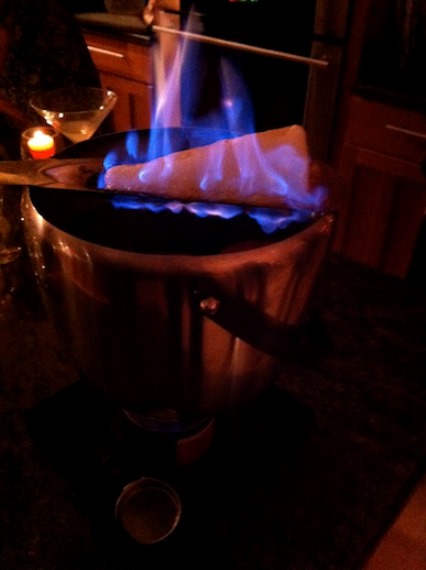 Feuerzangenbowle (as captured by The Food and Wine Hedonist)