“Radler”: The Solution to my Beer Dilemma 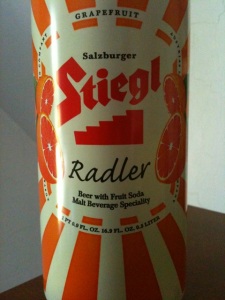 You might have gotten this fact about me if you are a regular reader: I don’t like beer. In a state like Michigan, with its vibrant microbrewing scene, this is almost blasphemy. Throw in that I am German of all nationalities and it is downright crazy, outrageous and reason to hand in my passport. I cannot tell you how often I get these incredulous stares when I tell someone that I don’t like beer…I can’t really tell you why I don’t like beer. I have come to believe it is its bitterness that I don’t find redeeming or pleasant.

Don’t get me wrong. I do drink beer, once in a while, and I also believe in social conventions that dictate “beer and sports”, for example. I have tried drinking wine watching sports, but it is not the same. So, I do believe there is a room for beer, I just make sure it tastes as little as possible like beer. Which is why I drink PBR (Pabst Blue Ribbon), the occasional Miller Lite or Miller Highlife. They compare to the German light weight beer “Kölsch”, the beer brewed in the city of Cologne. It drinks like lemonade and comes in small 0.2 liter glasses, so you just keep drinking and drinking and drinking. You can order it by the meter (the glasses are put on a one meter wooden board) and as long as you don’t cover your glass, you will receive new glasses without being asked. What makes this beer great for me is that it hardly tastes like beer.

My go to beer based drink in Germany, however, is something different. It is what in the US is referred to as “shandy”, a mix of beer and lemonade. In German, this type of beer is either called “Alsterwasser” (Water of the Alster, a river in Hamburg, usually in Northern Germany) or “Radler” (Bicycler, usually referred to with this word in Southern Germany). As a rule of thumb, a lot of them are 50% beer and 50% lemon soda, which in Germany is usually referred to as “lemonade”. The ratio can vary in either direction. It is insanely refreshing, does not taste like beer (major plus!) and is widely available.

Anecdotes suggest that the Radler was invented by a desperate Bavarian innkeeper in the 1920s. It was a warm, friendly summer Sunday afternoon and tons of people were out and about, passing his inn. The owner was selling record numbers of beer (it probably didn’t help than Bavarians drink huge amounts of beer from big glasses) and by the afternoon he started running out of beer. So in his desperation, he started mixing in lemon soda and selling it as the perfect drink for people riding their bicycles, hence the name “Radler”. I assume that beer and other stuff has been mixed before, but I do like the anecdote nonetheless. And I like to think that I was saved by this innkeeper when going out to a pub. Because thanks to him, I have something to order. And enjoy!

Nina is completely different: She LOVES strong IPAs, dark wheat beers and everything strong in beers. This often leads to waiters confusing our orders when we are in Germany, because usually guys order these beers, not girls. And girls order Radler, not guys…but hey, I stand by my love for Radler, especially in the summer heat.

German breweries have begun picking up on this trend over the last decade and have been selling premixed Radler, just like breweries have in the US. My favorite premixed Radlers are made by Beck’s and I am still hoping that given Beck’s omnipresence in the US these might eventually find their way here as well. I also really enjoy a mix of Weizenbier (wheat beer) with grapefruit juice sold by the Frankfurt brewery Schöfferhofer. I wish they’d sell that here…

While we were in Chicago last week, I received a text message from my friend John, The Food and Wine Hedonist, asking me whether I could bring him back some Austrian Radler that was available in Chicago. I was naturally intrigued. And after some hunting, I found Stiegl Radler with grapefruit soda at House of Glunz, an old wine store which apparently serves as the main importer of the stuff in Chicago. But it should be available at any decent liquor store in Chicago. Glunz sells it in half liter cans (classy, I know) and I was happy to bring some back for John and myself. Especially because it is really affordable, too: I paid $2.50 for four half liter cans!!!

We opened a couple of cans for a BBQ on Sunday and I quite liked the mix. It is VERY easy to drink, you hardly taste the alcohol at all. It hit a lot of right spots, although it seemed a bit too watery all in all. Given that its flavor was grapefruit, I naturally compared it to the wheat-grapefruit mix I mentioned above, and that is definitely better, has a bit more heft to it. But I’d still encourage you, beer lover (like Nina) or not (like me), to go out and find a Radler instead of a shandy. I don’t know what makes the difference between domestic shandies and European Radler, I just know I taste it…It sure gives me hope that other importers will pick up on this trend.

John has written a great article about discovering Stiegl Radler in his natural enthusiastic terms here.